Measuring the torque exerted by muscles is fundamental to many aspects of rehabilitation, industrial design, ergonomics and peak athletic performance. For example, designers of medical equipment for seniors design devices that require little torque for their operation, while designers of exercise equipment expect their users to generate a great deal of it. However, muscle torque itself is difficult for nonspecialists to define and quantify. 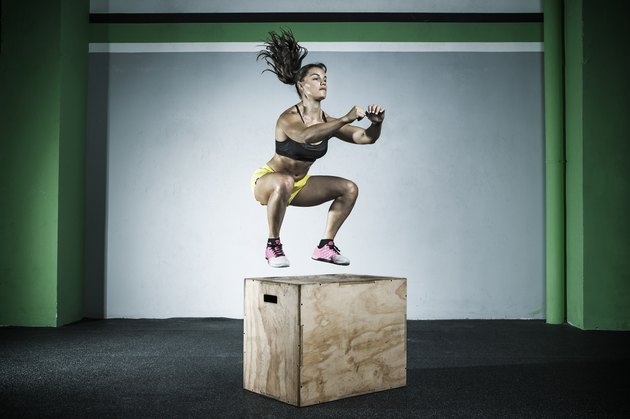 A woman is jumping up on a box. (Image: lagunaguiance/iStock/Getty Images)

Most people are familiar with torque as a term, if not necessarily as a concept. Rival automakers trumpet the torque of their pickup trucks in foot-pounds, and most drivers understand the need to use low gear for better torque when trying to extricate the car from a snowdrift. However, this doesn't convey anything about the fundamental nature of torque. Torque, in its simplest definition, is the application of force to an object on an axis. This could mean your car's transmission making the tires turn, or your own arms turning a socket wrench to loosen a nut.

Muscle torque follows the same basic standard, but it's complicated by the body's physiology. The basic force comes from a group of muscles, which can be pushing or pulling. The axis in the equation is the joint that's controlled by the muscles. A third factor in the calculation is the length of the limb or muscle group involved, which determines the leverage used to apply the force. All of these factors come into play when calculating muscle torque. The basic math is complicated by the fact that some muscles push while others pull, and that human joints operate in three dimensions, rather than two.

Muscle torque is calculated by the interaction of those three factors. The first is the actual force generated by the muscles themselves. Second is the length of the limb or muscle group applying the force, which determines how much leverage can be applied. This measurement is referred to in physiology and biomechanics as the "moment arm." The third factor is the angle formed by the moment arm and the joint, at the time the force is applied. Muscle torque, then, is the force applied by the muscles through a moment arm of a given length, at a given angle to the joint.

The actual calculation of muscle torque can be significantly more complicated. To begin with, the angle to the joint very often changes during the motion that creates the torque. Second, the rotation of the joint might not be flat but three-dimensional, as it is when a pitcher throws a baseball. Third, the length of the moment arm can change during some motions, as the relevant muscles contract. The necessary mathematics to accurately calculate muscle torque are outside the range of the average person, but specialists can usually arrive at an accurate measure in foot-pounds or Newton-meters.