The Mean Girl of the Year award goes to model and actress Dani Mathers. 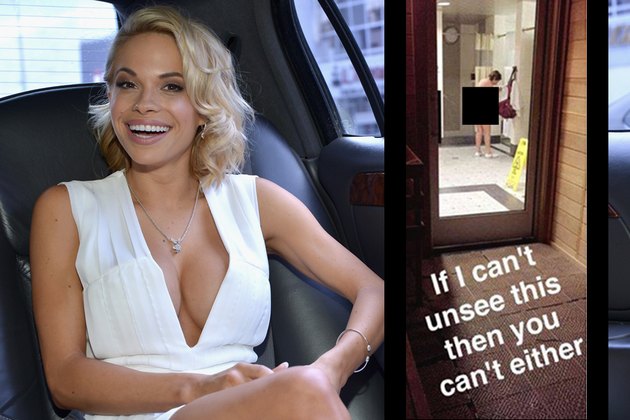 In a gross violation of the girl code, the 2015 Playboy Playmate of the Year secretly photographed a fellow LA Fitness patron in the nude in the gym's locker room and posted the image on Snapchat with the nasty comment, "If I can't unsee this then you can't either."

Mathers, 29, quickly took down the image and apologized in a video that she also subsequently removed. But fast-thinking webizens saved it for posterity -- and possible prosecution, as the police are now looking into the incident, according to news website TMZ.com. The site reported that she could face as much as six months in jail if the victim comes forward, that she has been suspended from her job on the Heidi and Frank radio show on L.A.'s KLOS and that Playboy has suspended Mathers from "Playmate activities."

In the video, Mathers claims that she posted the image accidentally and says that the action isn't representative of who she is as a person. She then goes on to confess that she had intended to share the image and barbed comment with a friend.

The Internet Strikes Back

Social media was quick to respond: "Dani Mathers: If your 'apology' includes 'I only meant to send it to one person, not everyone,' you don't understand what you did wrong," wrote Melissa A. Fabello, managing editor of @EvrydayFeminism and doctoral candidate in human sexuality.

Dani Mathers: If your "apology" includes "I only meant to send it to one person, not everyone," you don't understand what you did wrong.

"She is vile person, and is not sorry about what she did," Major Tom said of Mathers on YouTube. "She is only sorry that she got caught."

TJ Wells followed with the observation, "Prime example of a non-apology."

An LA Fitness rep told TMZ that Mather's actions are against gym rules that bar mobile phone use and photography in locker rooms: "We have handled this internally and also notified the police."

Regarding the incident, LA Fitness posted on Facebook, "Her behavior is appalling and puts every member's privacy at risk. We ended her membership and she cannot use any club. It's not just our rule, it's common decency."

Were Dani Mathers' actions just a stupid mistake or do you think that behavior is more sinister than she makes it out to be in her apology? What would you do if you were the person who was photographed? Do you think Mathers should be charged with a crime?

*This post has been updated to include LA Fitness' Facebook statement and to note TMZ's report on the police investigation.